Visitors 14
Modified 16-Jan-23
Created 9-Nov-22
65 photos
On November 4th around 2030 hours a motor vehicle accident involving two cars and a County Mobility Bus was reported at the intersection of Johnnycake Road and Baltimore National Pike in Westview. Engine 13 from Westview and Medic 2 from Pikesville were initially dispatched and after receiving several calls as to the severity of the accident upgraded it to a Rescue Box. Two cars were severely damaged with their occupants trapped inside. Once on the scene firefighters simultaneously worked on both cars to extricate the trapped occupants. The first driver was removed in about 15 minutes and the other one was removed in about 25 minutes. Four medics were dispatched to the scene and all of the victims were transported to local hospitals with non life-threatening injuries.
Baltimore County Police remained on the scene investigating the accident. 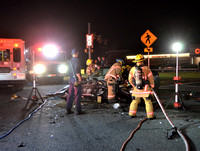